(Check out my previous article with a similar theme, “Why are There So Many Bible Translations?“)

Take a good look at this “family tree” of Christian denominations here. Confusing, isn’t it? And that doesn’t nearly include all of them.

Why can’t there just be one label on there, titled “The Christian Church” founded by Jesus Christ in 33 AD? Why can’t that single Church have a line drawn from it all the way up to 2016 AD, with no other branches? Why can’t it look like this? 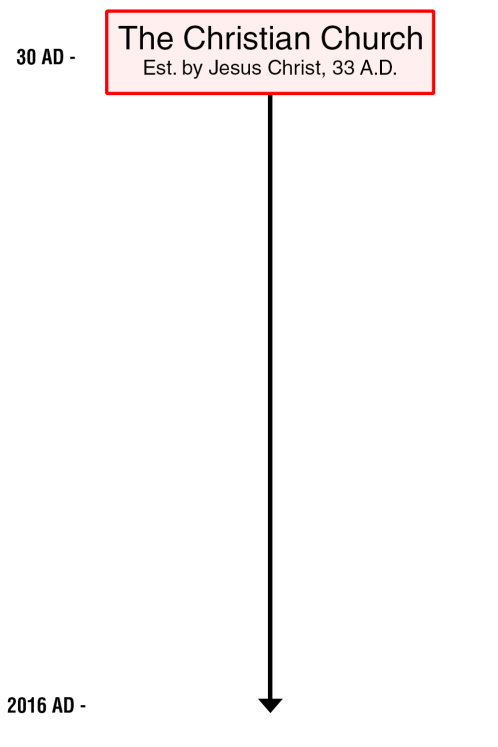 Actually, in a sense, it is that way, but it doesn’t look that way. More on that in a bit.

The vast number of Christian denominations is something I’ve heard atheists cite as evidence against the Christian faith. As the argument goes, if Christianity is the truth and the only way to salvation, why are there so many divisions within it? Why would Christians be arguing among themselves? Surely, if Christianity were true, Christians would be in agreement concerning their faith.

Now, this argument mostly ignores that fact that historically, Christians across the entire spectrum of denominations have affirmed many of the same central truths – the importance of Scripture, the work and person of Jesus Christ, the doctrine of the Trinity, etc.

More importantly, this argument presents a bit of a strawman picture of Christianity. The claim that “Christianity must be false, because its own followers can’t completely agree on everything” makes a strange assumption about the nature of religion. In essence, it is saying that “if a religion is the truth, all of its adherents will be in complete unity concerning that religion.” This assertion does not have any foundation. It certainly isn’t an assumption that historical and orthodox Christianity has ever held.

In fact, the New Testament writers anticipated divisions within the Church. The Apostle Paul instructed the Christians in Rome to “watch out for those who cause divisions and create obstacles contrary to the doctrine that you have been taught; avoid them” (Romans 16:17). There were even apparent divisions in the Church within a few years of Jesus’ ministry. The entire book of Galatians was written in order to refute the teachings of those known as the “Judaizers,” a sect of Jewish Christians who taught that all Christians must observe Old Testament Jewish customs in order to be saved.

Whenever talking about “the Christian Church,” it is helpful to make a distinction concerning what we regard the church to mean. Christian theologians have typically described the church in a twofold manner: the invisible church and the visible church.  The invisible church consists of all those who have been called by the gospel and justified by Christ. It is termed “invisible” because we as humans cannot see into people’s hearts to discern who has faith and who doesn’t. In this sense, the invisible church is the “true” church due to the fact that all of its members have true faith. The visible church, on the other hand, is a manifestation of the invisible church. We cannot see into men’s hearts to discern their faith, but we can get an idea of who our fellow believers are due to their confession of faith and their works before us. Charles Porterfield Krauth, a great Lutheran theologian of the 19th century, summarized this by saying: “Faith makes men Christians; but Confession alone marks them as Christians… By our faith, we are known to the Lord as his; by our Confession, we are known to each other as His children.”[1]

These denominations or confessions differ from one another in points of doctrine, and each asserts that its teachings are true. It is absurd to assume that all these churches have the true and right teachings. There is but one truth. A doctrine is either true or false. It cannot be both. . . There is only one true doctrine concerning the creation of the world, the Holy Trinity, the person of Christ, the redemption of the world, the conversion of man, etc. Whatever does not agree with this doctrine is false (323).[2]

So while we recognize that there are true believers (members of the invisible church) throughout various denominations, we also acknowledge that not every denomination can be correct in its public confession of doctrine, due to the exclusive nature of true doctrine. Additionally, there may be those who appear to confess true faith in Christ, yet still do not actually believe it in their hearts. Jesus tells us in Matthew 7:21 that “not everyone who says to me, ‘Lord, Lord,’ will enter the kingdom of heaven.” These individuals would belong to the visible church due to their confession, but not the invisible church, due to their actual lack of belief. Again, Koehler states:

Unbelievers and hypocrites may be active and affiliated with a congregation. However, they do not belong to the [true] church because the terms used in the Scriptures to describe the church indicate that there exists an inner relation and spiritual communion between her members and God. . . All true believers, no matter to which denominational body they belong, are members of this church. However, if one does not have faith, then one is not a member of the church, though he is a priest, minister, or the pope himself (314).[3]

There is only one true and invisible church established by Christ. Anyone who has true faith in Jesus Christ for salvation is a member of this true church, regardless of denominational affiliation. Regardless, denominations are important because they allow Christians of similar conviction and confession to engage in fellowship. We are not to ignore these doctrinal differences, especially those that are blatantly false and harmful. We are told countless times throughout Scripture to avoid false teachers and those teach destructive doctrines.

If you feel troubled by the apparent divisions within Christianity, take heart in the fact that there are true believers throughout many different confessions. Take to heart the words of Jesus in Matthew 16:18 – “And I tell you, you are Peter, and on this rock I will build my church, and the gates of hell shall not prevail against it.“

Pursuer of Truth in Jesus Christ. Will remain a child of God for life and for eternity.